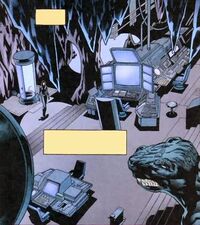 Brief:
The Batcave has always been the home sanctuary/base of the Batman and his team.
Located directly underneath Wayne Manor the cave was first discovered by a young Bruce Wayne when he was four years old, stumbling and falling into one the of the many grottoes on the estate. Years later he would begin to use the caves to store his equipment secretly as the vigilante Batman eventually transforming the cave itself into a base of operations for his continuing war on crime.

The cave is accessible in several ways due to the sheer scale of the cave's network of tunnels. Its main entrance can be reached through a secret door in Wayne Manor itself, which is located in the main study, behind a grandfather clock. The panel unlocks when the hands of the clock are set to the time that Bruce Wayne's parents were murdered: 9:47.
Another secret entrance, covered by a hologram or a camouflaged door, allows access to a service road for the Batmobile. Another alternate entrance is a dry well through which Bruce Wayne first discovered the caves. At one point, Tim Drake and Dick Grayson use the dry well to get into the cave, which they had been locked out of by Jean-Paul Valley during his time as Batman. 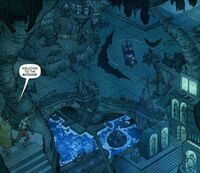 Originally, the cave systems were used and occupied by the Miagani Tribe of natives up until the early 18th century. Many examples of their existence in the caves remain even into the 21st century.

The cave systems were later rediscovered and used by Wayne ancestors Solomon Zebediah Wayne and Joshua Thomas Wayne as a storehouse as well as a means of transporting escaped slaves during the Civil War era. The 18th-century frontier hero Tomahawk also once discovered a gargantuan bat (owned by Morgaine le Fey of Arthurian legend) inside the catacombs, the origin of which was a result of a curse by Darkseid to hunt and kill a time-displaced Bruce Wayne.

Bruce Wayne himself discovered the cave system initially as a child when he fell through a dilapidated well on his estate.
Upon his initial foray into crime-fighting, Wayne used the caves as a sanctum and to store his then-minimal equipment. As time went on, Wayne found the place ideal to create a stronghold for his war against crime and has incorporated a plethora of equipment as well as expanding the cave for specific uses.

Due to the Gotham Cataclysm, an earthquake that leveled the majority of Gotham City, the cave systems were restructured by the quake, forcing Batman to rebuild not only the cave but Wayne Manor as well due to the building partially falling into the caves when the ground opened up. 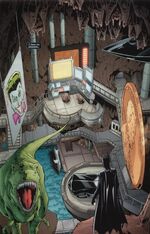 Although a virtual stronghold the cave has been invaded on more than one occasion whether accidentally by Man-Bat or far more intentionally by David Cain, Ra's al Ghul, the Black Glove and other heroes have been allowed access from time to time, such as Superman and his cousin Supergirl as well as Batman's extended family of vigilante crime fighters.

Originally operating out of the old barn on the Wayne property, Batman accidentally discovered the caverns beneath. At first, it was used to store his crimefighting equipment and vehicles, but soon it would serve as his base of operations. 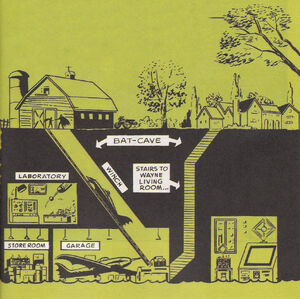 As the Dynamic Duo's crusade continued, more space would be needed. In the diagram shown, which is only a partial view, you can see that Batman began adding a second level. 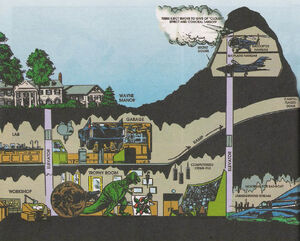 As the Batman's vehicle fleet and arsenal began to expand, new areas of the cave were opened up, including an underground river/pier to house the batboat and the building of a new hangar in the mountainside cliffs to store Batman's aerial fleet, which was previously stored underneath the barn. 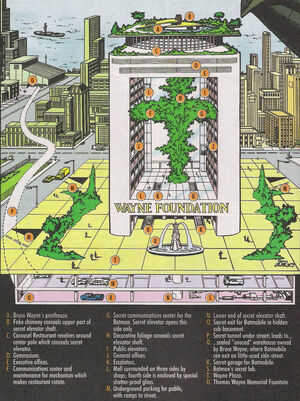 With Dick Grayson off to college, Bruce Wayne decided to move his base of operations to the center of Gotham City. Living in the penthouse of the Wayne Foundation building, Batman moved the contents of the Batcave into a secret sub-basement-turned-cave which became his headquarters for a decade.


Eventually, the base and all of its equipment would be moved back to Wayne Manor when Batman relocated back to the Batcave.

Following the Infinite Crisis, the Wayne Foundation Building was retconned away. Instead, the Wayne Tower would replace it's location, with the Bat Bunker becoming the cave that lay beneath the building, while the building's physical traits would be passed on to the R.H. Kane Building. 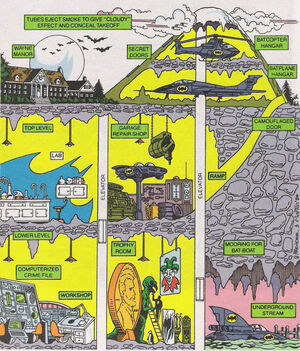 In the 80's the Batcave contained the world's most sophisticated computerized crime-lab, an exhaustive computerized file on all known criminals and their methods of operation, a complex workshop where the Batman continues to improve and update the contents of his utility belt, an automotive repair shop, and appropriate housing for his Batmobile, Batplane and Batboat.
At various times Wayne has also used an elevator to reach the Batcave but has apparently abandoned it due to mechanical difficulties.

The Batcave of the 1990's had a crime lab and forensics tools that rivaled those of the F.B.I. or Interpol. WayneTech sub-contracts had advanced the sciences of genetic and fiber analysis, while quantum leaps in computer engineering provided Batman with the hardware and software necessary to assemble the world's foremost digital database on criminals and their psychology. Later on, a subway rocket terminal was added thanks to Jean-Paul Valley's stint as Batman, providing Jean-Paul with a fast way to access downtown Gotham other than the Batmobile. Another unique addition to the cave was the handy-man hunchback Harold who was employed by Batman to work in the cave after being saved from Penguin.

Due to increased air-space surveillance by the authorities, Batman was forced to ground his flying fleet and rely instead on "borrowed" WayneTech aircraft operating from Gotham hangers. The cave, like the manor above it, fell victim to the earthquake that devastated Gotham. This forced the Dark Knight to remodel drastically. 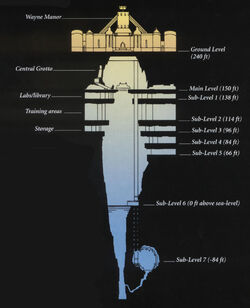 Completely restructured after the quake and No Man's Land this new Batcave contains 8-levels completely filled with equipment due to a new chasm within the cave. Retractable walkways bridge across the chasm as well as an "island" computer platform with seven linked Cray T932 mainframes and state-of-the-art hologram projector.

Maintained by solar and hydrogen power generators (S-L5) the new cave possesses guest quarters for Batman's allies (S-L1), and an improved gymnasium and shooting range (S-L2). As before Harold lived in the cave (S-L4) before his encounter with Hush, maintaining the vehicles and equipment including the Subway Rocket and Batboat (S-L6). Elevator access is provided to all levels, including a submerged chamber whose purpose is known only to Batman (S-L7).

While many things were excavated and returned following the earthquake, the giant penny remained lodged within a crevice in the cave's floor. 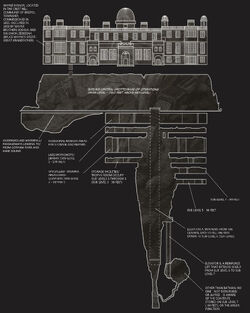 After the Infinite Crisis occurred, many things in the universe were reshaped. The Batcave was no exception with the appearance of the last two batcaves fusing resulting in a cave of colossal proportions both in width and depth. The manor above also received some changes, alternating back to its original design before the quake and No Man's Land era.


This cave would fall victim to Dr. Hurt's attack on Batman and his associates, resulting in its destruction, however, it was gradually rebuilt thanks to the efforts of the Bat Family.

The giant penny was finally excavated and returned to its display stand by Richard Grayson and Timothy Drake following Bruce Wayne's "death" during the Final Crisis. 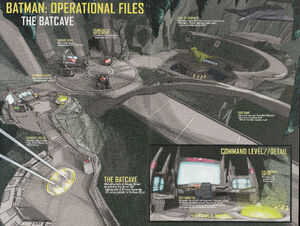 After the Final Crisis and Bruce Wayne's "death" at the hands of Darkseid, Richard Grayson would eventually take up the mantle of Batman and, in a bid for a fresh start, move the cave back to the abandoned bunker underneath Wayne Tower. However, while Batman (Richard Grayson) and Robin (Damien Wayne) operated from the Bat Bunker, Oracle and Batgirl (Stephanie Brown) would move in and start operating from the original cave under Wayne Manor until Grayson evicted them.

The cave remained empty until Bruce Wayne's return at the apex of a showdown between Grayson and Thomas Wayne (Black Glove), whereupon he restored the cave to operational status and enacted the worldwide "Batman Incorporated" scheme. 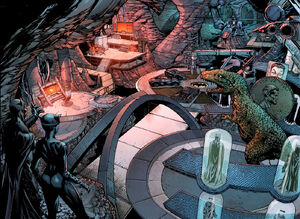 Following the Flashpoint event, the cave's origins were altered along with other facets of the DC Universe.

Community content is available under CC-BY-SA unless otherwise noted.
Advertisement